An example of my own today rather than from the press...

I was down at the EOI in A Coruña earlier today. There were two people in front of me in the queue. The first spoke Galician and was there for about ten minutes asking many questions. The admin clerk at the desk spoke in Spanish the whole time and at one point in the coversation the girl also switched to Spanish for a while before later reverting to Galician again. It was quite clear that Galician was her language of choice. Then she left. The guy in front of me also spoke in Galician but again was attended in Spanish. The clerk did not speak a word of Galician the whole time I was waiting (around fifteen minutes), despite dealing with Galician speakers. Either the clerk did not have the will or the ability to do so. Clearly she is not one of the alleged 90% of civil servants who is bilingual in Spanish and Galician (see my June 30th post). Some might argue that this passive bilingualism is no bad thing and that everyone understood each other. But it also occurred to me that if this situation happened in reverse, you could easily imagine word getting out and we'd have the cries of "Imposición!" from the usual suspects.
Posted by Galidonia at 6:39 AM 1 comment:

A Bigger Myth Than Hercules

If you visit A Coruña, one of the first things the Coruñeses are likely to tell you about their city is that the water at the central Riazor beach is freezing - much colder than the water in other places roundabout.

That didn't make sense to me at all. So over the least few weeks I've been keeping an eye on the water temperatures that appear in the Galician press. As I suspected, there is little difference (a degree or so either way between Riazor and other beaches around A Coruña). Sure, the sea is slightly warmer down in the warmer Rías Baixas but Riazor is not the north of Scotland, nor does it have an Arctic microclimate!

On July 15, the sea temperature at Riazor was 20º, a degree warmer than nearby Barrañan or Doniños. The following day was the same with more distant Laxe also recording the same water temperature (20º) as A Coruña. I haven't kept a record of all the temperatures but this pattern has been similar for the last few weeks (give or take a degree either way). No doubt many Coruñeses will refuse to believe what they have been convinced of for so long, but the meteorological reports show it is no more than urban myth. If you still think the water is much colder there, it is merely because your head is telling you so.
Posted by Galidonia at 8:08 AM No comments: 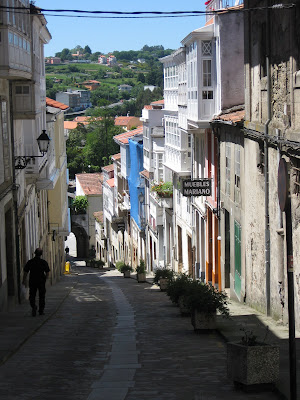 Betanzos (pictured*) was among Spain's top 12 most beautiful villages according to an internet poll conducted by an unnamed national magazine earlier this year. It's well worth a visit if you fancy a quiet day out near Coruña.

A Tower of Strength 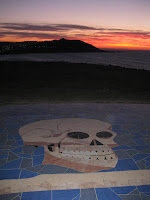 A few letters along the following lines appeared in the press in the week that the Tower of Hercules was awarded World Heritage status. This one is from the Xornal de Galicia:
Congratulations to the people of a Coruña and Galicia now that we have another World Heritage Site. It's about time our language had World Heritage status so that Feijóo does not appear on the scene to destroy it. Every attack he makes on our language is like removing a brick from our tower, our city walls or cathedral.
Pic.Galidonia©2009
Posted by Galidonia at 8:46 AM No comments:

Another View from Galicia

The problem is that a child who studies only Spanish won't know Galician, but one that studies in Galician will know Spanish in any case. As studies show, the omnipresence of Spanish ensures children learn that language, while the scarcity of Galician means the same cannot be said in reverse. The aim is for children to acquire equal skills in both languages and this will not happen if a child is prevented from studying Galician. If some people are genuinely concerned about imposition, then they also need to talk to businesses, the media, etc., as they demand a bilingual system which respects everyone. They also need to talk to Galician speakers who are forced to consume almost all their products in Spanish.* Is this not imposition? But this is not a concern of course. Some just want to be free of Galician. I know of people who are pulled up at work for talking Galician, but I don't know of anybody who is reprimanded for talking Spanish at work.

* I imagine this is a reference to food labelling, etc. which is mostly in Spanish. Although the supermarket chain Eroski, for instance, labels its own products in all four of Spain's official languages.
Posted by Galidonia at 7:18 AM No comments:

Inarticulate in Galician and Illiterate in Spanish?

This week I will be translating a series of letters that have appeared in the press recently about Galician. Today, two very contrasting viewpoints about young people and the education system….

Excerpt from letter to the Xornal de Galicia, 24th June

…I speak of my experiences as a teacher in Corunna city. In my high school at the moment, about 40-50% of studying is done in Galician with the remainder in Spanish. While dealing with the students on a daily basis, it concerns me that they are unable to string a few sentences in Galician together. They begin the sentence, stop short, think about it and then begin speaking again. They lack fluency and spontaneity while having no problem in Spanish. Furthermore, every single sentence of the little Galician they speak is badly articulated. If it’s not throwing in Spanish words (“ayer”, “bueno”, dibujo”) then it’s bad collocation of pronouns or use of compound tenses, e.g. habíamos feito instead of fixemos (note: compound tenses like the former are not used in Galician). If this happens in a school where 40% of content is in Galician, I shudder to think what it’s like in schools where less Galician is used, nor do I wish to dwell on what the future will be like under the newly proposed decree…

Galidonia comment: The writer goes on to say that for this reason more Galician rather than less needs to be taught in schools.

I think identifying members of Galicia Bilingüe with the right wing is totally inaccurate. I am an activist with a (non-nationalist) left wing party and agree with GB’s stance. I agree that our youngsters arrive at university barely knowing how to write in Spanish. Also I agree that in secondary education they teach how the Golden Age, the era of Lope de Vega and Quevedo, constitutes a dark chapter in Galician history. Furthermore I agree that diglossia exists and that Spanish will have to disappear so that this phenomenon does not occur. Of course the Galician language must be protected, and it is because a school subject with this name already exists and is compulsory in the final evaluation. But the idea of teaching all subjects in Galician, except the subject of Spanish, is going to lead to an abyss of unpredictable consequences which concerns parents of children of school age in Galicia regardless of our political views.

Galidonia comment: If you were to take both letters at face value, you would be left with the impression that Galicia is producing a generation who are unable to speak Galician and are virtually illiterate in Spanish! I know some intelligent and literate young Galicians who are also very articulate in English, so can things really be half as bad as they are depicted here?
Posted by Galidonia at 5:30 AM No comments: