Emmigration is a recurring theme in Galician history but nowadays more people are moving in. Immigration into Galicia has increased by ten percent in a year. Most incomers are South Americans: Brazil (8,309), Columbia (8,091), Argentina (6,390), Uruguay (4,449) and Venezuela (3,860). However, the largest single nationality group are the Portuguese (14,352). Other significant numbers of immigrants into Galicia came from Morocco and Romania. In contrast to many other parts of Spain, more French than British incomers arrived to enjoy Galician life. Although only 2.97% of the total Galician population is foreign, the immigrant population is almost double the figure of just five years ago. The figure is around 9% in Spain as a whole. Extremadura is the only autonomous community with less immigrants than Galicia.

Email ThisBlogThis!Share to TwitterShare to FacebookShare to Pinterest
Labels: immigration

"Figures of the calibre of Franco can't be judged until a certain amount of time has passed." Thirty odd years clearly isn't long enough for Manuel Fraga, Franco's former Minister for Information and Tourism and president of the Xunta (Galician Govt.) until as recently as 2005.
Posted by Galidonia at 11:35 AM No comments: 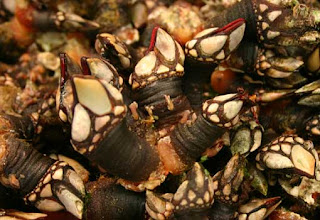 The Galicians love of seafood goes overboard during the Christmas period. Demand is always high for the much-prized percebe or goose barnacle (pictured). This festive season, Galicians were prepared to pay up to 330 Euros per kilo for them. A more typical price was 150 Euros for 1200g for the quality Roncudo type although they could be bought for as little as €20 per kilo if you were prepared to accept the frozen version from the North Sea.

Average prices for small crabs were 40 Euros per kilo for local produce and €12.50 for frozen ones from Ireland. Larger crabs cost €60 for the local goodies and those brought from Scotland were available frozen for just over 20 Euros.

Lobsters were more pricey – around €180 per kilo fresh although you could get them for less than €30 if you were prepared to rough it with the frozen ones imported from Cuba.
Posted by Galidonia at 2:03 PM No comments: