Investions have begun to establish whether ETA has created a temporary base in Portugal. Spanish investigation teams will work with their Portuguese counterparts in the same way they already do with the French. Spanish anti-terrorist experts believe there is an ETA base in the south of the country operating out of an isolated, rented house. Portuguese police doubt that this base exists although they acknowledge that there is ETA movement in their country. 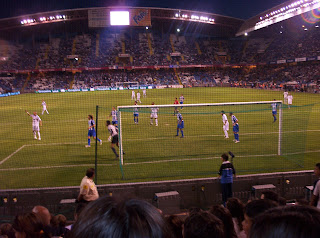 Deportivo La Coruña won their own pre-season tournament for the second year running. After defeating Atalanta (Bergamo) on penalties following a 1-1 draw they faced Real Madrid. The Spanish champions had beaten Os Belenenses (Lisbon) with a late Robinho strike assisted by a terrible error by the Portuguese outfit’s goalkeeper.
Real Madrid’s line-up for the final was a bit disappointing as they have the Supercopa (Spanish version of the Charity Shield) against Sevilla this weekend. Baptista scored a cracker though and I was well impressed by the defending of Sergio Ramos. Maybe he's one of those players you don't fully appreciate when watching on the telly. Depor also have new star to look out for – a Mexican international left midfielder/wing back called Guardado.
It was an entertaining game won by the hosts with strikes from Riki and a deflected Verdú free kick. It’s early days but there were signs that certain players, most notably Riki, might play with more freedom than last season when any flair Depor possessed was restricted by the stultifying tactics of Caparrós.

Os Belenenses beat Atalanta in the third place match but that didn’t stop the Italian fans from making a big noise on the streets of A Coruña.
Match highlights here:
http://www.youtube.com/watch?v=eKdYKPGJgUw&mode=related&search=
Posted by Galidonia at 2:19 PM No comments:

Saramago's recent comments have received a cool reception in his homeland.

Portuguese Foreign Office Minister, Luís Amado, said that the idea of Iberian union was more of a fictional scenario than a possibility. "The problem is not relations between Spain and Portugal, the problem is who is going to govern these relations."

Last September the weekly paper O Sol published a survey which found only 28% of Portuguese were in favour of a single Iberian nation. However, at the same time, 97% of those questioned said union with Spain would be of economic benefit.

Journalist Joao Céu e Silva points out that Saramago's comments have received a lot of attention in the international press while in Portugal itself they have been largely ignored.

*The author lives in Lanzarote.

Summarised Translation from La Voz de Galicia.
Posted by Galidonia at 9:27 AM No comments: