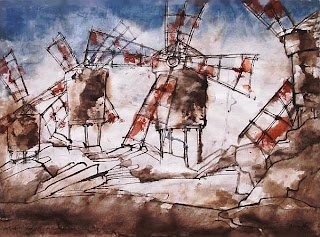 Galicia and the neighbouring region of Castilla y León produce 20% of Spain's wind energy but consume only 8% of the total.

Jousting with Giants
Posted by Galidonia at 10:09 AM No comments:

The Long Way Round

On 1 April, two Cantabrians set out from Torun, Poland, on a trek that they hope will take them to Santiago de Compostela. Eduardo Benájes (58) and Jesús Molleda(62), expect their walk will take three months to complete.

Their route passes through Germany and France to Roncevalles on the French-Spanish border. When they arrive in Spain, they plan to opt for the Northern Way, across the Basque Country, Cantabria and Asturias. The two hardy souls have been awarded €1,000 by the Cantabrian culture department. However, they estimate their journey will cost fifteen times that amount.

La Via Regia or Regal Way, is an old medieval route connecting Eastern Europe with Paris before it heads south for Santiago. It was an old commercial route used by merchants in the Middle Ages, passing through key German cities like Leipzig and Frankfurt. This is also known in Germany as the Salt Route. Another way begins in Kiev, some 5,000 miles from Santiago de Compostela.
Posted by Galidonia at 2:15 PM No comments:

Email ThisBlogThis!Share to TwitterShare to FacebookShare to Pinterest
Labels: The Way to Santiago

Rising in the Dark

As I have to get up earlier these days, I wasn't too happy when the clocks went forward. Geographically, it would make sense for Galicia to be on the same time as the UK and Portugal, but of course we are an hour ahead. According to an article in La Voz there is 40 minutes difference in the daylight hours between Catalonia in the east and Galicia in the west. I ask myself why we need to have daylight until 9pm at the end of March, while we have to get up in the dark just before 8am.
Posted by Galidonia at 1:48 PM No comments: