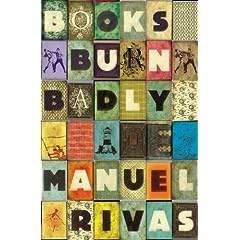 Today sees the release of the English translation of Manuel Rivas’ Os libros arden mal. The English version, Books Burn Badly, is translated by Jonathan Dunne and published by Random House. This is the sixth book by Manuel Rivas that Dunne has translated to English. Others include The Carpenter’s Pencil, Vermeer’s Milkmaid and Other Stories and In The Wilderness. Quite a feat, not least because since 1964 only 33 books written in Galician are known to have been published in the language of Shakespeare.

I must admit I’ve had the Spanish edition of the book sitting on my shelf for a couple of years now but haven’t got round to reading it due to the lack of time and desire to read such a weighty novel in a foreign language. But this whets my appetite.

The author and his translator will be promoting the book in London next week including an appearance at Harvill Secker’s International Writing Day in Foyle’s bookshop,Charing Cross Road, on the 27th of February.

This week also saw the bilingual Catalan-Galician edition of Cesáreo Sanchéz’ poetry collection El rostro de la terra published by Perifèric Poesía, with Xulio Ricardo Trigo carrying out the translation into Catalan. Like Rivas, Sánchez hails from A Coruña and he is president of the Galician Language Writers Association (AELG) among other things.

Meanwhile, Emily Dickinson’s anthology Poemas a la muerte has hit the streets in Spanish.
Posted by Galidonia at 5:05 AM