English under Threat in Scotland?

Carlos Callon’s recent article in Galicia Hoxe about the outlandish claims made by some that signposting in Galician cities is predominately in the Galician language led me to think about the situation in the UK and Ireland. There, you will hear some of the same kind of arguments about how much Gaelic or Welsh is around and about whether it is all a waste of time and money.

I’m going to focus on Scotland because that’s the place I know best. Recently I’ve heard a few claims that bilingual signs (Gaelic & English) are distracting drivers. Firstly, all we are talking about here is toponyms and street names. In other words, signs giving information about the distance to nearby towns, signs at the entrance to towns with the place name on it or street names in towns or cities. These will almost invariably include the English name as well as the Gaelic one, except in places which don’t have a separate English name, such as Drumnadrochit for instance. I’ve never seen or heard the village by Loch Ness referred to as Bridge of Drum, which is the literal meaning in English.

In the comments below a recent BBC article about The Death of Language, one Aberdonian claimed there was a “proliferation of bilingual signs (again in English and Gaelic) in Aberdeenshire. I will be on the lookout the next time I travel through the Grampian region. The poster must have a very different understanding of the word “proliferation” from me. I have never seen a traffic sign (Stop, Reduce Speed, etc) in Gaelic anywhere in Scotland and signposting in shops is conspicuous by its absence, at least outside of the Gaelic-speaking heartlands of the Western Isles and a few other places in the highlands. I haven’t been to those islands for some time but even then I’d confidently state its written presence is minimal in comparison with English. As for the Aberdeen area, I’ve spent plenty of time there, visited recently and can’t recall seeing any Gaelic signs at all!

I’ve seen a few Gaelic signs in and around government buildings in Edinburgh, and in a few places in Glasgow (traditionally the city most Gaelic-speaking highlanders move to for work or study). Glasgow Queen Street railway station is one place that comes to mind. The name of the station is clearly on view in Gaelic. It’s easy for me to remember this specific example as it’s very striking due to the lack of Gaelic in public places in Scotland’s major cities. 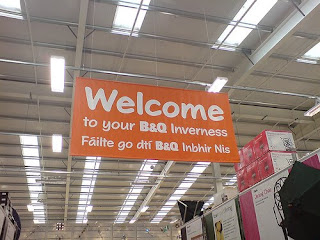 You are far more likely to see Gaelic in public places in the highland capital of Inverness or other smaller towns in the Highland region. Particularly in and around council buildings or cultural centres. Also, on street signs, although only in central parts of Inverness as I recall, and again it will always appear bilingually with English. When Gaelic information is given in cultural or tourist sites, it is common to find condensed versions of a more detailed English text. A token word or two of Gaelic at the door, such as “Fàilte” (Welcome) is often considered quite enough. But credit to B&Q for their efforts above as this is a rare site in commercial premises.

Although far more widely used throughout Scotland than Gaelic, the Scots language fares even worse due to its lack of official recognition. You will do well to notice its presence in public at all. It features in poems inscribed on the walls or pavement around the Scottish Parliament Building in Edinburgh. But it’s more likely you will see it in the form of graffiti written by Scots-speakers! However, on the Scottish Parliament website information is available in Scots along with 13 other languages. This is just one example of the current Scottish Government starting to take Scots a bit more seriously as a language that can have a purpose beyond poetry or informal conversation.

Scots also features in place names or in street names (sometimes in monolingual form for the same reason as the Drumnadrochit case mentioned earlier). Some examples can be seen on the website of the Scots Language Centre. However, over the years there have also been many examples of Scottish street and place names being given an English makeover, such as the example of Baxter Wynd being changed to Baker Lane.

Even this minimal exposure to Scotland’s other languages is too much for some. They may tell you that Gaelic is a good thing but yet they are easily inconvenienced and don’t want it to affect their everyday lives in any noticeable way. For that reason, I would argue that some see Gaelic as a form of cultural decoration, something concrete that marks Scotland out from England, but that it must be kept firmly in its place. In other words, it must not interfere at all with the daily routine of a monolingual English speaker.

Another thing some people complain about is the cost of promoting the language. They seem to think that a language will continue to exist or even thrive without financial support and a place in the education system. It’s always easy not to care of course – provided it’s not your own native language that is at stake. That is why many monolingual speakers of a global language like English (or indeed a widespread international language like Spanish) fail to empathise – at the end of the day they know it is not their language that is under threat and so can’t identify with the situation.
Posted by Galidonia at 4:01 PM

With regard to the campaign to save endangered and dying languages, can I point to the contribution, made by the World Esperanto Association, to UNESCO's campaign.

The commitment was made, by the World Esperanto Association at the United Nations' Geneva HQ in September.
http://uk.youtube.com/watch?v=eR7vD9kChBA&feature=related

Your readers may be interested in http://uk.youtube.com/watch?v=_YHALnLV9XU Professor Piron was a translator with the United Nations in Geneva.

A glimpse of Esperanto can be seen at http://www.lernu.net

Hello !Last week I've discovered this blog and I feel quite surprised on the similarities about your point of wiew about the defence of the socalled "minor languages"
Thanks for your support in our fight with our loved language the galician. That's my language and the real language of this country.
May I make you a suggestion for a next post? Ok! You know some days ago in the newspaper La Voz de Galicia there was an informative reports about the real knowledge of englist between pupils in the primary and high schools. The real thing it seems that many of us were taught mainly from a point of wiew of language learning centered in granmar. But not so much in his practice. For this reason we have to "think first" before speaking. It's funny to know that many of our inmigrants who went to earn his life in England for instance with a lesser level of "formal" education can speak reasonably well than many of us (!) Don't you think that what it happens is that the leaning model is outdated? Of course this does not mean that some degree of grammar's knowledge is necessary. But anyway I think that the opinion I've readed at the newspaper talken by someome ( I don't remenber his name now)
about that the key point was mainly to pass the exam. What do you think about it as a professional of language ?

Those are interesting comments and it's a good suggestion. Yes, I have some views and ideas about this, so I'm going to blog about it. Look out for the post in the next few days, okay?

Thanks for your interest.